What is Stress Testing

The idea is to create an environment more demanding of the application than the application would experience under normal work loads. This is the hardest and most complex category of testing to accomplish and it requires a joint effort from all teams. A test environment is established with many testing stations. At each station, a script is exercising the system. These scripts are usually based on the regression suite. More and more stations are added, all simultaneous hammering on the system, until the system breaks. The system is repaired and the stress test is repeated until a level of stress is reached that is higher than expected to be present at a customer site. 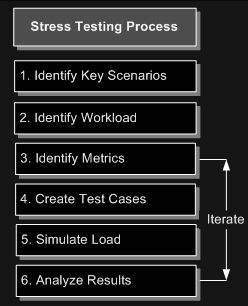 Race conditions and memory leaks are often found under stress testing. A race condition is a conflict between at least two tests. Each test works correctly when done in isolation. When the two tests are run in parallel, one or both of the tests fail. This is usually due to an incorrectly managed lock. A memory leak happens when a test leaves allocated memory behind and does not correctly return the memory to the memory allocation scheme. The test seems to run correctly, but after being exercised several times, available memory is reduced until the system fails.