What is Ad Hoc Testing

This type of testing is done without any formal Test Plan or Test Case creation. Ad-hoc testing helps in deciding the scope and duration of the various other testing and it also helps testers in learning the application prior starting with any other testing. It is the least formal method of testing. View pdf tutorials about Ad-hoc testing after reading all these details.

One of the best uses of ad hoc testing is for discovery. Reading the requirements or specifications (if they exist) rarely gives you a good sense of how a program actually behaves. Even the user documentation may not capture the “look and feel” of a program. Ad hoc testing can find holes in your test strategy, and can expose relationships between subsystems that would otherwise not be apparent. In this way, it serves as a tool for checking the completeness of your testing. Missing cases can be found and added to your testing arsenal. Finding new tests in this way can also be a sign that you should perform root cause analysis. 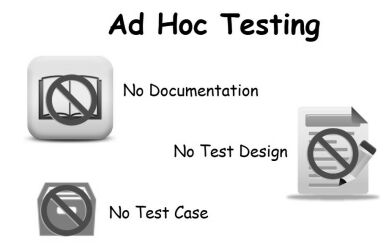 Ask yourself or your test team, “What other tests of this class should we be running?” Defects found while doing ad hoc testing are often examples of entire classes of forgotten test cases. Another use for ad hoc testing is to determine the priorities for your other testing activities. In our example program, Panorama may allow the user to sort photographs that are being displayed. If ad hoc testing shows this to work well, the formal testing of this feature might be deferred until the problematic areas are completed. On the other hand, if ad hoc testing of this sorting photograph feature uncovers problems, then the formal testing might receive a higher priority.