What is User Acceptance Testing

User Acceptance Testing can be done by in-house testing in which volunteers or paid test subjects use the software or, more typically for widely-distributed software, by making the test version available for downloading and free trial over the Web. The experiences of the early users are forwarded back to the developers who make final changes before releasing the software commercially. 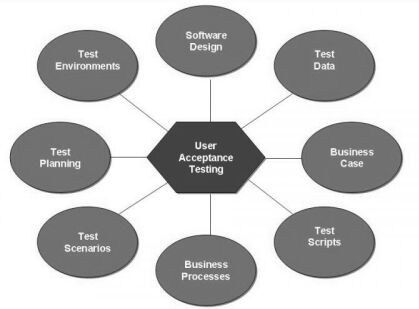 The popular technology encyclopedia, Technopedia: “User acceptance testing (UAT) is the last phase of the software testing process. During UAT, actual software users test the software to make sure it can handle required tasks in real-world scenarios, according to specifications. UAT is one of the final and critical software project procedures that must occur before newly developed software is rolled out to the market.”

User acceptance testing also goes by other nomenclature such as End-user testing, Application, or Beta and is usually the last stage during the process of designing a website before the software is finally distributed or installed on the system of the client.

User Acceptance Testing is divided into the following types:

In this testing, the tester doesn’t bother himself with the features of the application but tests whether the software meets its purpose. In essence, some functionalities of the software will be tested.

This is also called Field Testing and takes place in the customer’s environment. This is specifically testing the software extensively by a couple of customers who use the software in their environment. After the testing, they will provide feedback that will be used to improve the product.

The software is checked against some regulations such as legal and governmental regulation to determine whether it meets those regulations. This is also known as Compliance Acceptance Testing.

This testing is carried out to determine whether the designed software meets some specifications and criteria which are specified and agreed upon before the development of the software.

This testing is used to determine the operational readiness or pre-release of a system, service, or product as an important aspect of a quality management system.

Sometimes, there may be the need for in-house testing of a software program. These are the simple steps to take for testing:

Why is User Acceptance Testing Necessary?

You may be wondering why a company will go through the process of repeatedly testing a product before it is distributed for general consumption. Here are a few reasons why the testing is necessary:

If you have a system designed for public consumption, you will not want to avoid the user acceptance testing. It is the only way to ensure the efficiency of your system.