What is ALPHA TESTING

In this type of testing, the users are invited at the development center where they use the application and the developers note every particular input or action carried out by the user. Any type of abnormal behavior of the system is noted and rectified by the developers.

Alpha testing is done before the beta testing and after the acceptance testing. Mostly its done by the in-house members from developers and qa teams. I simple words its the testing by developed team just before launching the live beta version of that software.

Alpha testing is the preliminary software field test that is done by a team of users with the purpose of discovering bugs that had escaped being detected in previous tests. Alpha test is carried out in order to detect and fix bugs that exist in a system, though they might not have been found in the tests previously done. The test is usually done at the developer’s site.

Alpha testing gives room for minor changes to be effected before the development of the application is completed. It is usually handled by a group that is not a part of the design team, though they still work within the company. Examples include software QA engineers or in-house software test engineers. They can also comprise of potential customers/users. Both white box and black box techniques are used for the test.

Alpha testing passes through two different stages of testing most of the times – first phase and second phase.

The advantages of alpha testing include the following

Alpha testing is necessary for helping to identify bugs while software is still being developed. This aids the developers in fixing the bugs before moving on to the next stage of development. 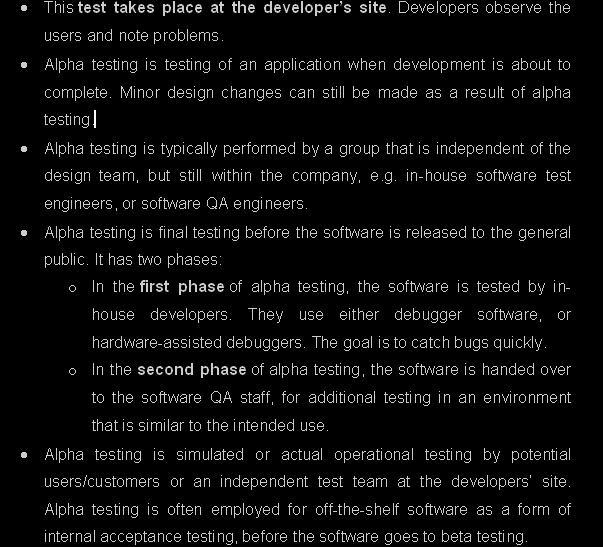