Security Testing is carried out in order to find out how well the system can protect itself from unauthorized access, hacking – cracking, any code damage etc. which deals with the code of application. This type of testing needs sophisticated testing techniques. After reading this tutorial refer the advanced pdf tutorials about Security testing in software development

In this non-function testing all type of malicious attempts will be simulated against the application to find the loopholes in our application.Security test is a part of the higher level group of tests. It determines the vulnerability of the system.By testing a security, we can protect resources and data from eventual  intruders. The goal is to determine how the system reacts to unauthorized attacks.

The process requires active system analysis because of eventual gaps that can derive from a poor configuration of the system. And from both known and unknown software and hardware differences.

This analysis is done from the position of a potential intruder and it can include active exploitation of security failures.

Security matters found through this testing are presented to the owner of the system. Effective security tests can estimate possible influences on the organization. And to suggest numerous technical and procedural measures lower the risk.

Security testing is a discipline of testing and analyzing applications for security vulnerabilities. It’s a hugely important phase in the application lifecycle no matter if you are building new applications or updating existing ones.

It’s also of the utmost importance to carry out application security testing and if you don’t there will be consequences for business.

How to face the threats

Because of this variety of threats, it is important to monitor latest trends and methods used by the attackers.

Security tests show that more than a half of all exploits for web applications are actually related to cross-site scripting and SQL injection vulnerabilities.

IT departments from all over the world are under a lot of pressure from their businesses to deliver new applications and services. Therefore, it isn’t rare that security is delivered just as an afterthought at the end of the project.

Because of that, where there is a larger range of security issues it is important to integrate security framework. 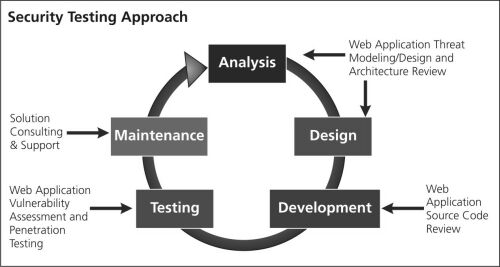