Behavioural Job Interview questions are questions that will seek very definite examples of experiences and skills that are directly related to the position. The Human Resources professional would want to find out how the interviewee managed a situation and you would be expected to explain what you did. The manner by which a situation is handled in the past is a pointer to how it would be handled in future. Many types of organisations make use of Behavioural Interview questions.

Take a look at good examples of behavioral Interview Questions one is likely to encounter during a Behavioural Interview. Study the answers and with good understanding, decide how to answer them in your own words. 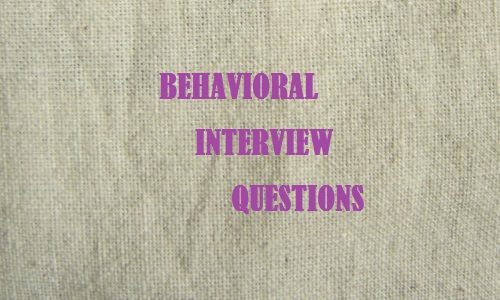 Question:Explain how you were able to work effectively under pressure.

Answer: I worked on a crucial project that was supposed to be delivered to the client in sixty (60) days. My Line manager instructed me to get the job ready in forty-five (45) days without losing time on our other projects. I responded by challenging my staff to deliver the project to time, so added more time to our schedules, shared the workload appropriately and we got the project ready in forty-two (42) days.

My ability to effectively allocate the tasks among my already great team of staff I had was largely responsible for the success of the project.

Give an instance of how you handled a challenge

Question:  How do you handle a challenge? Give an example.

Answer: Once, my supervisor had to leave town unexpectedly while in the middle of a very crucial negotiation with a prospective sponsor. I had to fill in for him by applying myself to make sure the team was properly covered.

As a result, I was given the responsibility to prepare a PowerPoint presentation from the notes he left behind and a few briefing from his manager. After a brief but rigorous preparation, my presentation was successful. This made the prospective sponsor to give us the sponsorship deal. As a way of appreciating my efforts and encouraging me I was recommended for award by the Management team.

Question: Tell us about a mistake you made in the past and how you handled it.

Answer: There was a time I misquoted the fees for a particular kind of membership. I felt very bad about this and had to summon courage and approach my supervisor concerning it and I was surprised by the response from him. He appreciated my honesty and boldness and advised me to give concession to the new member by waiving his application. So the member joined the club though I made a mistake about his fee. My supervisor was considerate and this taught me to be careful and be thorough next time and how to turn an employee’s mistake around for good.

Question: Describe how you once set goals.

Answer: Within about four weeks of starting my first job with a department store whilst a sales associate, then I discovered that I ought to be working within the fashion industry. As a result, I made up my mind to climb up the ladder in 2 years to manager of department, a position that would give me the opportunity to save enough money to be able to enroll in a fashion school full-time

Things worked out exactly as planned and I even got a job via an internship I finished the summer before my graduation.

Question: Describe how you managed implementing a decision you took that wasn’t well-liked by people.

Answer: Sometimes ago, I inherited a set of employees as their supervisor moved to another city. They were permitted to do one another’s shifts without approval of the management. I realized this created inconsistencies that wasn’t good for the company, a situation where certain employees were being afforded more privileges than others. In order to address this situation I initiated a system where I made my assistant consent to every staffing changes, as to ensure everyone that wanted more time and was free at certain periods could be made use of.

Question: Describe an example of how you worked in a team.

Answer: While in my last semester of College days, I worked as one of the members of a research team in the department of History. The professor heading the project was at that time writing a book on Language development in Europe during the Middle ages.Each of us was assigned different sectors to work on, so I recommended that we convene separately prior to our once-in-a-week appointment with the professor to review our progress, so as to help each other out  if anyone had any challenge. The professor actually appreciated our teamwork and this helped him a great deal to streamline his research the way we worked together, and it helped to restructure his research as well. As a result, months ahead of schedule he was set to start work on his final copy.

Question: If someone disagrees with you at work, how do you respond?

Answer: Some years ago, my supervisor asked me to discover ways to outsource majority of the work we did in my department. On the contrary, I saw my department as one where having the employees on premises created a massive influence on our efficiency and ability to communicate to our customers. I approached her with a strong case, in response she came up with a compromise strategy.I persisted with my facts and she later bulged when it was very clear my argument would do the company the ultimate good.

Question: discuss an example where you were able to motivate co-workers or employees.

Answer: I once found myself in a situation where my department management was being controlled by employees who had no experience in our department, in a bid to optimize profits above service. A lot of my colleagues resisted the spontaneous changes that took place, but when I identified a few benefits we stood to gain, I had to make a u-turn and motivate my co-workers to give the new idea an opportunity to succeed.

How did you handle a difficult situation?

Answer: At some point while I worked with ABC Global, I discovered one of the employees was addicted to painkillers that were prescribed to her after her surgery. Her work output dropped and I found out she needed help. On speaking with her one on one, I realized how bad she needed medical attention which I helped her arrange as a weekend treatment program. She took advantage of her as it was covered by her insurance and the result was good as she recovered from the medical challenge. Her impact at work improved so much that she was promoted six months later.