Volume testing is done against the efficiency of the application. Huge amount of data is processed through the application (which is being tested) in order to check the extreme limitations of the system. Read a pdf tutorial about Experiments with High Volume Test Automation after this article.

Volume Testing, as its name implies, is testing that purposely subjects a system (both hardware and software) to a series of tests where the volume of data being processed is the subject of the test. Such systems can be transactions processing systems capturing real time sales or could be database updates and or data retrieval.

Volume testing will seek to verify the physical and logical limits to a system’s capacity and ascertain whether such limits are acceptable to meet the projected capacity of the organization’s business processing.

The checklist for volume testing

To verify the ability of the system to handle the volume of data fed into it, compare the outcome of the test with this checklist. 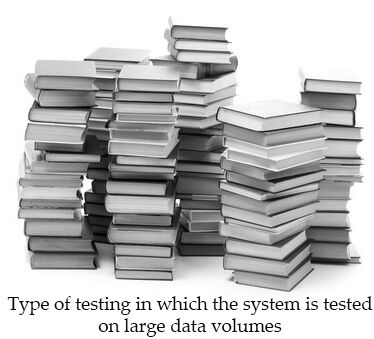 Paying close attention to these will offer a helping hand in identifying any loopholes that need to be blocked to promote the overall performance of the software.  Why is volume testing in software development important? A discussion of the benefits of conducting volume testing will answer this question.

The objectives of conducting volume testing in software development

The main objectives of performing volume testing on software applications are:

Ensuring that a system is tested with these objectives in mind will assist the developers to have a system that meets the required benchmark.

The basic characteristics of volume testing are these:

To drive home what volume testing really means, some typical examples are given below:

Performing either of these activities or a related one will serve as an effective volume testing technique that will possibly give the best result.

A comprehensive and effective volume testing involves the following processes:

When everything is put in place, a very simple and effective volume testing will be done to add more to the credibility of a software application to meet the objective it is designed for